Several attributes of Windows 10 after updation transform into a complete new feature as if we have installed a new app in it. And that is giving a rise to numerous burning questions in mind. If you have any doubt about Microsoft’s new operating system, here are some resolutions that will give you significant facts about Windows 10.

Up-gradation Process And Its Cost:

Windows 10 released on July 28 at 9 p.m. In the beginning, it will be free for one year for all Windows 7 and Windows 8.1 users. If you are running an older version then it will cost you around $119 for Windows Home, and Windows 10 Pro for $199. And those who have reserved their free copy of Windows 10 will receive notification when Windows 10 will be available for them to install and then they can even schedule the installation process as per their own appropriate time.

Sole Operating System For All Devices:

The main objective of Microsoft was, while developing Windows 10, to create such operating system that could run proficiently on all devices. And Windows 10 is the result of such vision. It solely powers all devices such as desktop, tablet and windows phone. Windows 10 is built with sensors that will know whether you are using a keyboard and mouse or using a touch screen and will react accordingly. If you are interacting with a keyboard or mouse you will experience standard window attributes. If you are on your tablet, Windows 10 will mould itself into full screen apps and a finger friendly start menu to give better user experience. But the situation is little different when it comes to mobiles as there will be Windows 10 mobile. Nevertheless, Microsoft has shown phones that turn into PCs when mouse and keyboard are attached.

You can buy any app from Windows store and that will be able to run on all your devices. This universal app will then automatically adopt any form that will be appropriate to run on device you are using, whether you’re on a tablet or a PC. You might have experienced the same taste with Microsoft’s office suite, which is the full Office experience in a format that’s appropriate for your device.

Microsoft has made touch friendly, full screen app optional in Windows 10. It is more convenient now to use these apps. If you are using 2-in-1 device, like Surface Pro 3 and you attach keyboard to it, you will see the standard desktop with Windows 10’s “new” old-school Start menu, and once you remove it, your device will again turn into the finger-friendly tablet mode.

Existing modern apps will take full advantage of Windows 10, so there is no space of anxiety. If you are using it on tablet, they will behave as they use to, and if you put it on desktop mode they’ll convert into a normal windowed app that you can drag around at your leisure.

There are several other factual changes Microsoft has made in Windows 10 like introduction of a brand new browser, called Microsoft Edge, along with old internet explorer and the good old days Start menu has returned. So you can say that Microsoft has a lot to offer this time in Windows 10 and its changes and offers will remain a continuous process.

Below is the infographic on Windows 10 facts: 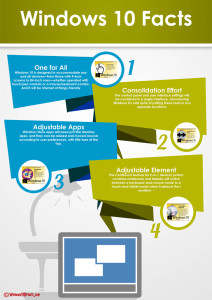 One thought on “Windows 10 Facts And Infographic”