Windows 11 Concept For Mobile And Desktop

As techindustry and numerous Windows users are curious to know more about the coming window news, also there is official announcement from the Microsoft no Windows 11 is coming in future. However, this has not stopped Windows fans to imagine Windows 11 concepts with inclusion of all desired features that every fan wants.

Several fans have designed Windows 11 concept and the one we are talking here is quite remarkable. This new concept is designed with different type of glass effect, dissimilar to all previous blurred glass concepts. Click on the below concept to see full large size. 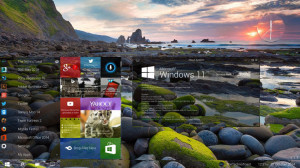 New features can be seen in this concept are:

When one will sign in, you will find user’s profile next to the time and date. Cortana is active, though option is available to turn it off, and will be listening to you, you can command any voice query to her. For example: Saying ‘Hey Cortana’ will bring up the tile from the start menu and will open a search field, where you can either type a search query, or say it. Uploading files to the cloud is easier by just dragging and dropping you can perform the task. Based on the image color of the background, system text automatically adjusts its color. There are two backgrounds in the taskbar — the left background is for the Windows logo/search bar/running windows, the right is for the time, date, profile and other system icons. 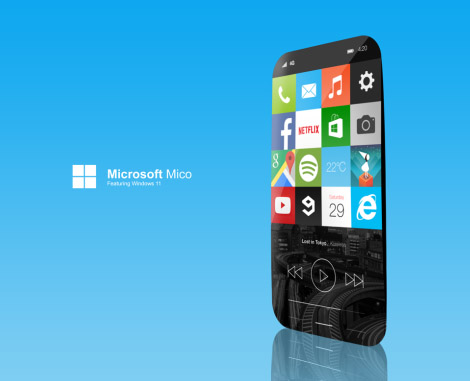 If we give a quick look at the phone, it will look like a placeholder that showcases a brand new UI and a new approach. The phone is integrated with 15 megapixel camera with a “slight fisheye built in” and flash. The camera lens is of high quality that can capture emotions with every picture. The project Microsoft Mico’s design reflects the Microsoft new technology, and Windows logo also embedded with fluorescent lights that can be used as a small screen for selfie reference at the back side. The designer of the concept, Viktor, has included ‘Every’ button that can be used in several ways. If clicked once it will act as back Button and if double clicked functions as a Home button.

The same button is used to lock and unlock the phone. If one will press the button for 1 second, phone will get lock and to unlock hold the button for 5 second. The phone comes with with HD speakers and microphone and the screen is curved and features an edge to edge approach. The phone is quite sleek and as far as the UI goes, the tiles have returned, in 3D fashion and with more flat look. This designing concept is quite impressive, what do you think?

3 thoughts on “Windows 11 Concept For Mobile And Desktop”